The recent trip of Pope Francis to the Arabian Peninsula objectively opens new political perspectives for Islam and possibly begins to turn around a situation that emerged some 40 years ago.

Perhaps the initial historical error of the West in its political relationship with Islam and radical Islam began with the revolution in Iran at the end of the 1970s. The radical currents of Islam had always been there, but the political dynamics were very different as radical Islam didn’t have a territorial basis.

Political divide after the fall of the Turkish Empire

The collapse of the Turkish empire and its caliphate occurred because the French, and even more so the British, mobilized a nationalist and “purist” Muslim consensus against the caliph of Istanbul. He was both the head of the empire and the supreme juridical and religious authority over the holy places of Islam, and as such a protector of faith.

When the British gave the holy places of Islam to the Saudis and supported the newly formed Wahhabi conservatism, they did so to prevent a return of the Turks. They had been defeated in World War I but remained resilient and gave themselves a new nationalist identity. At the same time, a return to the conservative religion of the Saud made it more difficult to restore the Turkish caliphate, which had been modernizing in the preceding decades.

In the same period, the Muslims of Central Asia had been mobilized by the Bolsheviks in an anti-Christian function, since the Orthodox Russians instead supported the newly deposed Tsar dynasty. Still, at the same time, traditional Islam had become the flag against British imperialism in Egypt, with the Muslim Brotherhood, and in India, in its various forms, more or less religious or Marxist. Against the radicalism of the Muslim Brotherhood, however, the British could support the Saudis, Wahhabis, and other traditionalists but in a different way and thus stop the anti-British and anti-colonial religious call.

Conversely, this anti-Wahhabist Islamic revanchism was supported by the newly formed USSR first and most successfully after the World War II.

The mix of socialism, authoritarianism, and Islam was the flag with which the USSR extended its influence in Muslim countries. The Western countries instead supported the old and new monarchies and governments of the Islamic area, which were often also authoritarian, even if apart from the Saudis, none was particularly radical in its interpretation of Islamism.

In any case, until the revolution in Iran, Islam was a divided political flag following the rift of the Cold War, without any particular political connotation beyond the separation of the Cold War then under way.

A territorial basis for Radical Islam

The revolution in Iran fundamentally changed the political dynamic of Islam and its radicalism. It is from there that the true and profound roots of current extremism are born. This does not mean that the attackers today are children and “validated” by the current government of Tehran. But the Shiite revolution in Iran proved that Islam (in that case in its Shia form) could have a third and strong position with respect to the divisions of the Cold War, playing right on those divisions.

The US made a miscalculation for “goodness”. They believed that supporting the idea of human rights in Iran and overthrowing their own man, the Shah, would give new legitimacy and impulse to their battle against the USSR. Perhaps they also believed that the Shiites were less “political” than the Sunnis, and they probably thought that the ayatollahs would control themselves, like the Saudis.

It was the Shiite revolution in Iran that reinvented a radical tradition that had been lost in Iran and in many Muslim countries, or often had never existed. Shiite radicalism was a political-religious invention. Likewise, democracy under the control of a sort of Islamic Pope-king, with priests who were traditionally certified in a country that had almost always been controlled by emperors, was a total novelty.

The Iranian revolution inspired the Shiites of the world and also inspired the Sunnis to reinvent Islamic radicalism in the early 1980s.

This Sunni traditionalist reinvention was more directly supported by the United States, which supported and armed the Mujahedeen guerrillas in Afghanistan against the Soviet-style Kabul government. The Saudis provided money, the ideological apparatus, and the guides.

The operation was so successful that the war in Afghanistan contributed to the collapse of the USSR. But it also created another territorial basis, the space, the breeding ground in which al-Qaeda was born, the perpetrator of the September 11, 2001 attack.

The war in the former Yugoslavia proves that the seriousness of the phenomenon of Islamic radicalism was neglected in the West in the 1990s. Here the Americans supported the Bosnian Muslims, also funded and trained by the new Saudi and Afghan radicals, against the Christians of Serbia. Basically, everything then was still an anti-Russian function.

This was also born on the one hand by US intervention with Saudi Arabia and Kuwait against Iraq, but it could grow because Afghanistan had been abandoned to the mujahedeen who, as victors over the Soviets, felt betrayed by the Americans. Of course, the failed war in Iraq and in Syria, by leaving space out of control to different warring factions, provided new breeding grounds to different new forms of Muslim radicalism.

This very short story does not exhaust a huge issue here, but stresses that the problem of Islamic extremism is not religious; it is political, and created by various very recent historical events. Islamic extremists had a multi-pronged strategy. On the one hand, they blackmailed and terrorized moderate Muslims by saying, essentially, «if you do not support us, we will kill you».

On the other hand, they assumed the legitimacy of the leadership of Islam by fighting Christians in their homes, and thus claiming to overthrow centuries of withdrawal of the Islamic world in the face of Christian successes.

But this long historical perspective is false, as we saw true Islamic extremism began in 1978: it is just 40 years old. The lengthening of the history of modern phenomena reinterprets them as ancient phenomena in order to find a legitimization for a modern invention. This happens all the time with new phenomena. For example, the Sicilian mafia, which has a maximum of 150 years of history, with many deep fissures that have changed its structure, in its tales boasts millennial roots.

Such myths of millennial wars have a grip on the public even outside the Islamic world, and it is precisely the hatred, terror, and desire for/panic over a war over religion in the West that fuels the reaction in the Islamic world and legitimizes the extremists.

Without entering into religious matters, the Pope’s trip to Dubai, which follows years of effort to welcome Muslim refugees, is a very important political gesture. It breaks the fiction born in 1978 and matured after 2001 of an indissoluble radical link between politics and religion in Islam. It gives ordinary people and political leaders an opening to escape the blackmail of terrorists who seemed to have taken over the moral and political leadership of Islam.

The real issue is can there be a new secular leadership strong enough to oppose the extremism and invent a new form of “being together” not only with Christians but simply with any other people. The Umma, the important idea of community in the Islamic world, why can’t be understood as a community of human beings?

These questions are starting to take a new shape with the Dubai conference. 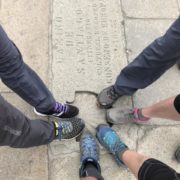 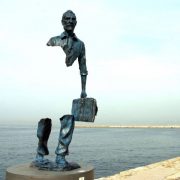 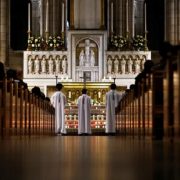 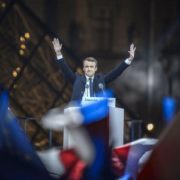